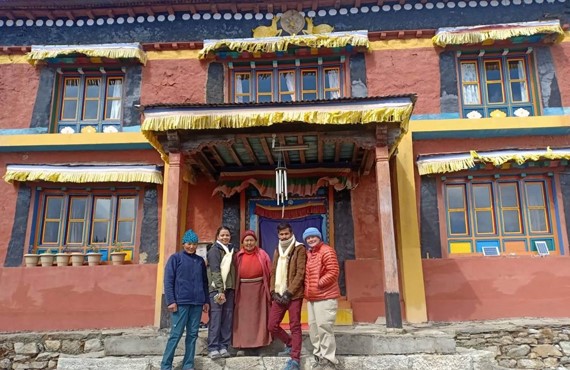 Lawudo is a rural village nestled between the great Himalayan range in the south and the Tibetan plateau in the north. Reaching Lawudo takes two days if the weather is favorable. The beautifully clustered monasteries and the majestic mountainous landscape has attracted thousands of tourists and hikers over the years. Villagers live in harmony, often dispersed over a wide region.

The only problem in Lawudo is electricity – the closest national grid is 50km away and, considering the slow progress of development in mountainous regions, the village is still light years away from stable energy access. During the day, men work outdoors and women fetch water from streams nearby, and children attend schools. At dusk, the village shuts down: shops close and, villagers empty the narrow streets and enter their respective homes.

When GhamPower engineer Asha Khanal first visited the place, she was appalled by the miserable conditions of the villagers. Mobile phones were absent, some low-income households had never worn, and perhaps seen, a pair of slippers – the village resonated 19th century life in every way. As energy precedes basic infrastructural developments, Asha Khanal was determined to bring power to the village.

On October 2018 and following months of discussions with key stakeholders, Gham Power installed a 2.56 kW solar system with 19.2 kWh of battery backup, and a 5 KVA of inverter. Although the solar modules are insufficient to power the entire village, it is a big leap forward. With access to electricity, Lawudo, hopefully, will be integrated to the rest of the society.