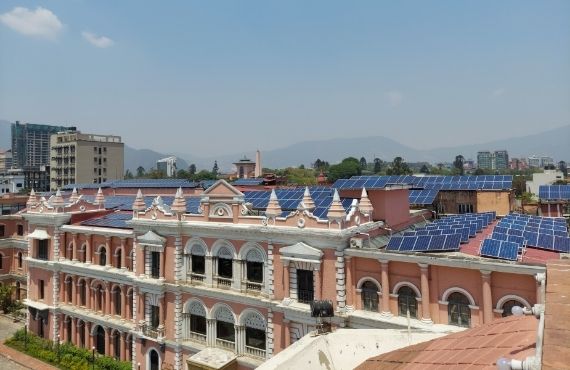 Located in the heart of the bustling city of Kathmandu, Hotel Yak and Yeti is a luxury 5-star hotel – the first of its kind in Nepal. Originally known as the Lal Durbar, the hotel was opened in 1977 with 120 rooms that was later extended bringing the total to 270 rooms for this 5-star property. Once a Rana Palace, the hotel surrounds itself in an exquisite array of historic artifacts,murals and intricate carvings which makes the hotel seem as an art gallery or museum.The hotel runs its own restaurant, convention center, fitness center and luxury spa and a casino as well. As the hotel provides its services 24/7, it has been paying over Rs. 5 crore annually for electricity to NEA.

To ensure a more robust energy supply and to lower the overall cost of electricity,Gham Power has designed and is planning to install a 413KWp solar system at the hotel’s premises as a part of our ‘Commercial and Industrial solution business model’.  The proposed system will generate 4,54,300KWh electricity annually. With the installation of this system, the energy consumption is expected to reduce the daily load to 1,652KWh consequently reducing electricity bills as solar electricity will be used to power the daytime load. As a result, the estimated annual savings is expected to be approximately Rs. 70 lakhs. This project is the largest  grid-tied solar solution based in Nepal financed entirely by a private bank. This is a new milestone in developing solar roof top projects in Nepal as this proves that solar is feasible at commercial rates also, for large institutions.

The system also reduces  the total annual carbon emission of the hotel by 318 tonnes, mostly by reducing the consumption of diesel during load shedding and by replacing the coal based electricity imported through India.

After the installation of the system, Gham Power helps with the Operation and Maintenance (O&M) of the system and also provides the customer with an online platform whereby they can look monitor the day-to-day performance of the system in real time. Since this system does not have batteries, there are very few issues with maintenance and the customer realizes payback much faster. In the case of Yak and Yeti, the payback period was close to 4 years.

The entire system has been warranted for 5 years.