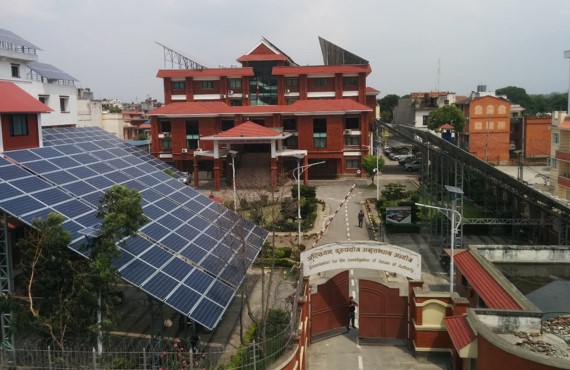 Commission for the Investigation of Abuse of Authority (CIAA) is a constitutional entity created with the goal of controlling and eventually mitigating corruption in Nepal. Its Tangal headquarter houses more than 400 dedicated employees. Until 2016, the head office experienced severe power outages – blackouts that could run up to 19 hours a day during drier months. This severely restricted the working hours of the employees, as most of the activities are conducted over computers.

CIAA was previously using a diesel generator to close down this persistent energy gap. Some of the disadvantages of adopting diesel powers are the operational cost of diesel is high compared to solar or grid line electricity, diesel isn’t always available in the market hence, raising issues about unreliability. Besides economic factors, emissions of diesel badly pollute the environment.

Gham Power installed a 514 KWp solar-grid tied at CIAA to reduce the energy gap and simultaneously provide an economic and reliable solution. It is the first application of Power Purchasing Agreement (PPA) in Nepal. The PPA allows CIAA to sell surplus energy to the National Electricity Authority at Rs. 7.3 per unit. The system is backed by 192 units of battery, which powers the building with two days of autonomy.