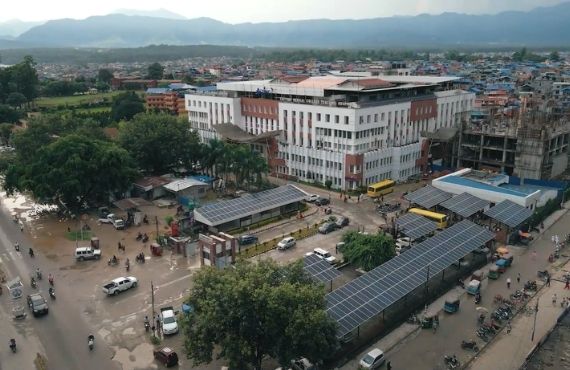 Chitwan Medical College Teaching Hospital (CMCTH) located at Bharatpur, is a medical institute that is devoted in providing quality health care services to not just the local citizens but people from all over Nepal. Established in 2006, the hospital employs more than 1400 people and provides service to approximately a quarter of a million people a year with more than 1500 patients seeking healthcare every day. Its services include advanced diagnostic facilities and imaging services with capacity up to 750 beds.

With various equipment running 24/7, CMCTH has an energy consumption of 1.6 million kWh per year and spends 34 million rupees annually to cover their utility energy cost. In addition to this, they also rely on a diesel generator which not only increases their overall energy cost but also releases significant carbon emissions.

Solar to the rescue

Till a few years ago solar was considered as an expensive option. This made solar seem like an unattractive proposition to clients such as the CMCTH. But, with solar panel prices reducing drastically over the course of the last couple of years, solar panels can now help save million of rupees in energy cost for institutions like CMCTH.

For customers such as the CMCTH, Gham Power has developed an innovative business model which allows them to install solar without any initial investment. The model involves signing a Power Purchase Agreement (PPA) with Gham Power. The rate of the PPA will be less than what CMCTH is currently paying to the NEA. Under this model, Gham Power is currently installing a 200KWp solar system at the hospital’s premises. The system can be further expanded to a 500 kWp system in the near future.

Through this model, the hospital can utilize clean electricity at a much lower cost compared to the supply from NEA by powering daytime load with solar electricity. After the installation, the daily load is expected to reduce by 674 kWh. As a result, the estimated annual utility consumption is reduced by 23%. The system reduces the electricity cost by 11% over the course of 15 years and the estimated savings in 15 years is to be approximately Rs. 57 million. After 15 years of usage, the hospital will become the legal owner of the system itself and will get free electricity for the next 10 years saving additional 40 million.

There are a total of 20 medical colleges and 125 public hospitals and more than 300 private hospitals in Nepal that can benefit by having solar on their rooftops. Gham Power provides a holistic solution by not just reducing electricity bills but also helps in curbing CO2 emission and supports a Green Business Approach. This results in massive cost reductions for these social businesses that can divert their valuable resources elsewhere to support their local communities.