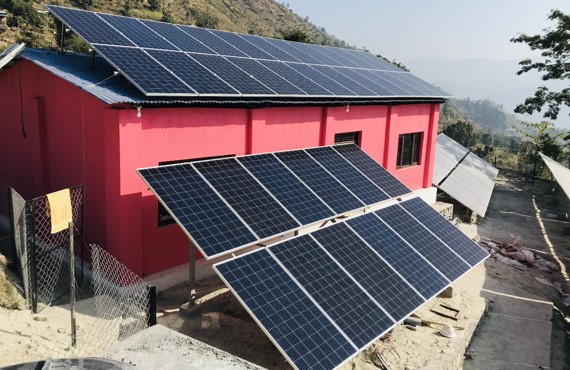 Trucks loaded with equipment and bags packed with our belongings to suffice us for the next three months, we boarded the trucks and started our journey to an unknown village. Although we were briefed on what to expect, we were still skeptical about how our task would proceed. With this uncertainty, we arrived at ‘Miteri Bhanjyang’, the central market of Hilepani.

Situated in the eastern part of Nepal, with Sunkoshi and Dudhkoshi flowing by its side, Hilepani is a serene village located amidst the sloppy hills and the majestic mountains in Okhaldhunga. As eager villagers with garlands and kind smiles welcomed our team, the sight of stone and mud houses with slate roofs on sloping hills greeted us. Small blue solar panels were fixed on the roofs of those houses. The chairman of the users’ committee was kind enough to give us a tour of the village and offer us shelter at his house.

Although connected to the national highway, Hilepani was not yet connected to the national grid and did not have a proper water supply. The community still relied on biomass for fuel to run their households. It was disheartening to see that this Rai village, only an 8-hour drive away from the capital, did not have any signs of development. Although a health post was available, many health facilities were still not feasible. The village had 4 schools: one primary, two lower secondary schools and one providing education till grade 10. But due to the lack of proper electricity supply, the students were restricted to limited hours of education. Yet the community maintained their daily lives with no objections.

After a few days of site survey and planning, we began the project. Just as the trucks were filled up with the materials and being sent from Kathmandu, several landslides occurred which blocked the roadway to the village. Heavy rainfall and the slippery roads accompanied by landslides posed as a major hindrance to the transportation process. Finally, after 5 days, the trucks arrived at the village and our team bounced with full momentum.

We faced some trouble transporting the equipment to the construction site due to the lack of road facilities in the village. We then planned to construct a gravel road leading up to the site. Since our planned roadway underway some of the villagers’ land, there was a small dispute between the local villagers and the user committee. As an outsider, it was difficult for me to understand the political structure of the village which was the cause behind these disputes. After proposing to return the land in its original condition, the villagers agreed to lease us their land, and the work began with no obstruction.

Every evening after planning for the next day’s activity, I was invited to the local houses for dinner where we would spend the next few hours sharing life experiences. Our every night bonfire had unknowingly turned into a ritual of its own. Listening to their stories was an eye-opening experience for me. Everyone had their different journey of life with the same common problems. And these common problems had united the village as a whole.

Finally, after months of continuous hard work, the construction of the mini-grid was complete. Through this mini-grid, 235 families will now have a reliable source of energy paving a way for new income-generating activities. The 50KW solar mini-grid generates enough power to facilitate the running of small businesses such as solar grinding mills for their agro-products, helping them to generate revenue. The villagers have already started planning on operating cold stores and homestays to bolster tourism in their village.

98 days in Hilepani, living with a host family, gave me a closer perspective of the local life, culture, politics, and society. Hilepani was just not another project I was a part of. It became a journey of itself; an expedition of life experiences.