Improving installation practices to defy challenges of the pandemic 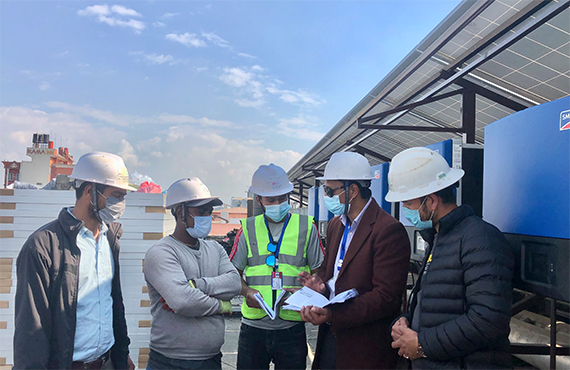 “It was a rollercoaster of emotions,” says Jiban Twayana, Installation Manager, as he recalls getting the news of his installation team member testing positive for the coronavirus.

Gham Power recently completed a major solar installation project with Hotel Yak & Yeti amidst the pandemic. It is the first private sector solar project subsidized by AEPC and financed by NMB bank. In addition, the system installed at Hotel Yak & Yeti is one of Gham Power’s largest projects, and installing it during the time of a global pandemic was a challenging task.

The Gham Power team, like a lot of people experiencing the pandemic, had an initial period of uncharted impediments. The government imposed odd-even restrictions on vehicular movement created challenges in mobilizing our technical team. We explored alternate routes of transportation and opted for new suppliers as the procurement process also took a hit. To ensure the safety of the installation team and the system, regular meetings were conducted virtually with the team of Hotel Yak & Yeti as well.

In spite of all the hurdles the installation team of Gham Power had to overcome, we managed to install the system within 400 man-days.

Tracking the current performance of the system at Hotel Yak & Yeti, statistics reveal that it has been surpassing our estimated results.

The project at Hotel Yak & Yeti had its own share of ups and downs. With a global pandemic at hand, the project took a lot of digressions but we still successfully managed to complete the project. In the present day, our team is still in contact with the team of Hotel Yak & Yeti to provide our after-sales service and receive feedback on the system. Moving forward, we hope to work with organizations, such as Hotel Yak & Yeti, to help them not just reduce their electricity bills but be a helping hand for moving towards a more sustainable source of energy.

Krishak Pathshala: Virtualizing the digital Agri-advisory services
Making the most out of my first internship at Gham Power
Taking action to strengthen our energy security
EARTH DAY: Then and Now – Invest In Our Planet
From our Farmer’s Perspective: Using Technology in Agriculture