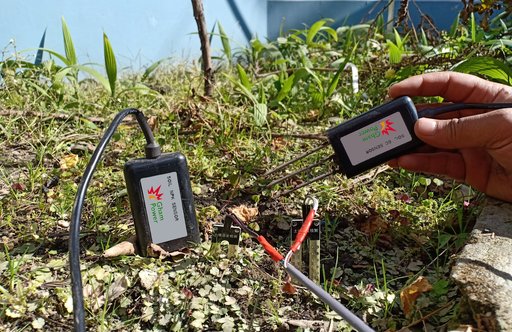 What we learned by digitally measuring farm data?

The green revolution has led to impressive progress in increasing agricultural production over the last few decades. It’s undeniable that crops raised on fertilizers have produced historical yields. After all, the key composition of most fertilizers—nitrogen (N), phosphorus (P), and potassium (K)—make plants grow faster and yield higher. The diet our crops feed on affects what gets into our food, and what we get—or don’t get—out of these foods. I am sharing the story of the junk fertilizers used during a research in Gham Power Nepal while validating the smart meter – accessories to Solar Water Pumping Systems (SWPS) for supporting rural and precision agriculture through data-driven farming.

We were carrying out research to validate the measurements of different parameters of soil (NPK, electrical conductivity, soil temperature, atmospheric humidity, and temperature) sensed and recorded by the smart meter developed by Gham Power Nepal. We used the commercially available fertilizers in Nepal supplied via agro-vets in Kathmandu with the universal specification value made for the composition of these fertilizers.

During analysis, the expected measurements made by the smart meter were very low for N, P and electrical conductivity of the soil. We approached the next research assuming that these readings were due to the wrong experimental setup. At this time, I analyzed the composition of chemical fertilizer samples used for the research in the lab. I was surprised to see the test results that were unexpectedly lower than the specified value of their composition. Up to three times the chemical solvents used for the purpose were remade with precision to reach their specified concentration; up to the third lab experiment, the findings were consistent.

It is universally recommended that urea must contain 46% of nitrogen, but the commercial urea sold in the Nepali market only had 36.92%. The specified value for DAP is 18% nitrogen and 46% phosphorous, but the sample we used only had 0.19% nitrogen and 17.22% phosphorous. The composition of chelated potash was as specified. These findings revealed the substandard form of the fertilizers supplied in our farm and have given rise to quality issues.

This composition of fertilizer made the expert team revamp the experiment; though the data recorded were the same in the next experiment too. The technical team while performing an experiment after playing with some numerical values was able to sort the cause of the problem. Is the common farmer who believes in agro-vets able to understand what he is feeding to plants by using such chemical fertilizers? Are the fertilizers checked in quarantine check posts? Are suppliers, retailers and sellers following the standard procedures during transportation and storage to maintain the nutritional status of fertilizer in agro-vets? How has the state monitored the illegal supply of chemical fertilizers in Nepal?

Recent research conducted by an international team of agriculture scientists in Nepal revealed that zinc deficiency in Terai soil was causing stunting in Nepali children. We tend to use chemical fertilizers for high yield, but they look like pieces of stone applied to the soil that will turn into the soil in a millennium. In the meantime, such fertilizers lyse the beneficial microorganisms in soil and disturb our food production chain and deteriorate the soil quality. The ultimate loss bearers of this are the farmers, our ecosystem and the consumers.

Fertilizer Consumption rate has been booming in Nepal since 2008 in the last decade. This rate has increased from 1.4 kg/ha in 2008 to 74.1 kg/ha 2016 and still, the state is not able to guarantee enough chemical fertilizer supply and farmers are procuring their demand illegally from India. Agriculture Inputs Company (AIC) and Salt Trading Co-operation (STC) are the two state-owned companies engaged in supplying fertilizers of Nepal. The owner of agro-vet insists that these fertilizers were supplied by AIC. If this is true, it raises a question on the reliability of fertilizers supplied by AIC. With the increase in demand for food, the rate of fertilizer application is increasing rapidly; in the meantime, these findings have questioned the credibility of the government. Who is regulating the composition of fertilizers supplied in Nepal? Is there any measurement in the harmful effects caused by such fertilizers to our ecosystem?

Efforts to increase productivity by using chemical fertilizers have environmental costs and health impacts. The inappropriate use of inputs for agricultural production has far-reaching effects. In many developed countries, excessive nitrogen fertilizer applications have sometimes led to pest problems by increasing the birth rate, longevity and overall fitness of certain agricultural pests, such as aphids. Further, excessive use of fertilizers emits significant quantities of greenhouse gas into the atmosphere. Over-fertilization of a vital nutrient can be detrimental, as “fertilizer burn” can occur when too much fertilizer is applied, resulting in drying out of the leaves and damage or even death of the plant. The condition will be even more aggravating when we apply the fertilizer samples that we have used during our experimental setup in the farm. Instead of supplying specific nutrients to the soil, they destroy the beneficial microorganisms present in it.

Gham Power has reached the installation phase of smart meters incorporating it with Solar Water Pumping Systems (SWPS) after validating the readings in order to provide dynamic agri-advisory related to scheduling irrigation and applying fertilizers by analyzing the real-time data in our Off Grid Bazaar digital platform. Hence, rather than the validity of the technology we have developed, the results are also influenced by the fertilizer source. If the supplied fertilizer in Kathmandu is substandard, what might be the case in rural premises of Nepal? The damage caused by chemical fertilizers is often long-term and cumulative; it’s high time that we consider alternative and sustainable methods of fertilizing the soil.